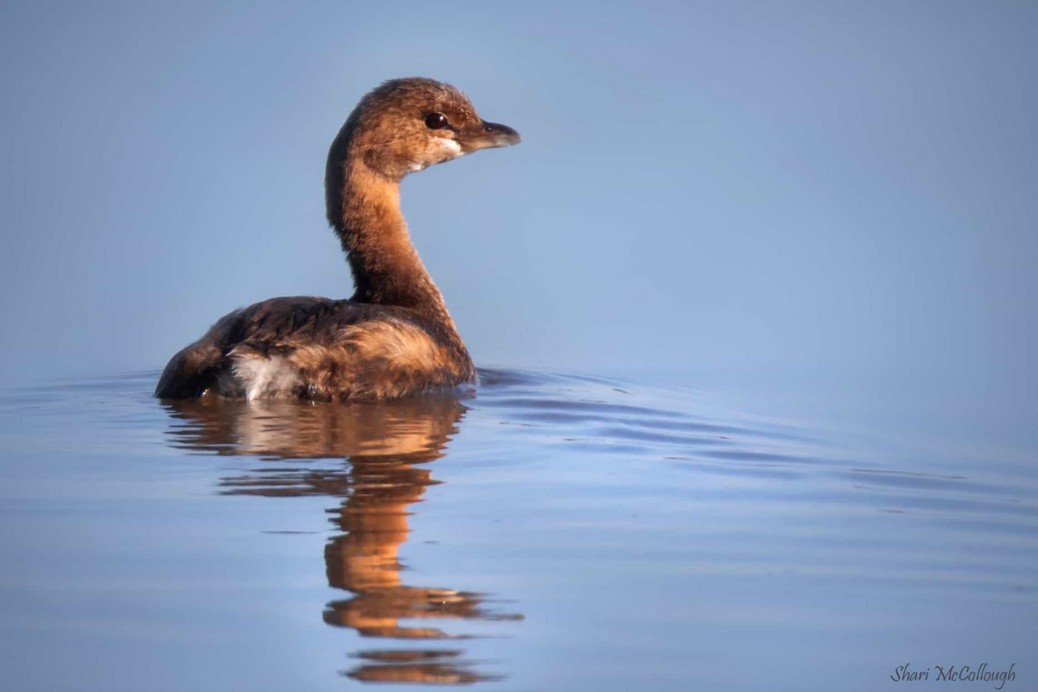 Back in spring of 2015, my first attempt at birding solo was not going well. Waterfowl flushed the moment my foot touched the boardwalk, cattails obscured everything, and the fog was only getting thicker. I was about to call it quits…

Then I heard it.

A sudden burst of otherworldly gulps, whoops, and puppy-like whimpers. Just as my brain was starting to process, the calls started up again–this time with nasally, diabolical, Peter Griffin-like laughter.

Surely this gargantuan voice must match the bird’s size–perhaps a swan or heron? But no, slipping away into the mist, the bird revealed itself as no bigger than a baby duck.

So what was this strange cackling creature from the black lagoon? Meet the Pied-billed Grebe.

More formally known as Podilymbus podiceps. The latin name by the way, refers to the bird’s loon-like legs, Podilymbus, rooting from “feet at the buttocks” and “rump-headed”. The name is well-suited, and over the decades, the bird has earned several more titles of a similar nature–but I’m getting ahead of myself.

To the eye, this bird is easy to overlook. It moves into our area during peak waterfowl migration, and as a frequent diver with a modest profile, can take some effort to keep your binoculars on. It’s plumage is fairly drab–an ashy-brown hue on the upperparts. This is really, all you’ll ever see, apart from it’s fluffy white rump resembling (to my eye anyway) training diapers.

Compared to the average waterbird, the Pied-billed is small and stocky in it’s build. In anime terms, I would describe this grebe as “chibi”, as it’s head seems overly-big, it’s body overly chunky…and yet somehow it retains it’s cuteness all the same.

Despite being North America’s most widespread grebe species, this little guy prefers solitude. When threatened, it will dive out of sight. Bill Thompson described it perfectly in his “Indiana Bird Watching” guide that Pied-billed “have the tendency to appear, as if by magic and to disappear just as fast”. Indeed, this bird has adapted a fascinating way to stay out of the public’s eye–it becomes a living submarine.

When a Pied-billed senses a threat, it will press the air out of it’s feathers and body and sink straight down, barely making a ripple. It’s both unsettling and hilarious the first time you witness it.

The Pied-billed’s gift for sinking and lengthy dives has earned it some interesting nicknames over the years: “dabchick”, “devil diver”, “dive-dapper”, “dipper”, “water witch”, and (my personal favorite) “hell-diver”. I really wish I knew the origin story on the guy who gave it that one.

During nesting season, Pied-billed Grebes seek out marshes with dense vegetation, and rely on their vocal talents over their dance routines– which brings us back to how I discovered it in the first place. Turns out, grebes also have trouble seeing stuff in thick fog crammed with cattails, so what better way to get the attention of your partner by making a bunch of bizarre, outlandish whoops? I’ll have to try it sometime.

The Pied-billed Grebe nests throughout our area this time of year in bogs, wetlands, and other marshy habitats. If you keep your ears open, you’ll likely hear one. If you’re really lucky, you may even catch a glimpse of the hell-diver stealthily sinking out of sight.