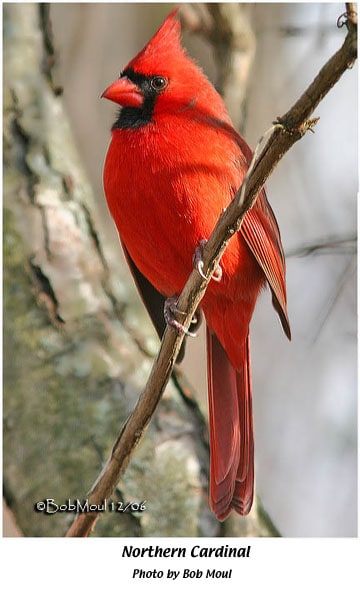 Ask any group of folks what their favorite bird is and many will undoubtedly say, “Cardinal” or “Red Bird”.

Of course, this is if you ask any…”group of folks”. I’m almost ashamed to say that for “Birders”, (myself included), we generally don’t get overly excited about the cardinal. That’s because they are so widespread and so common. I mean…come on…a person can’t spend more than a few minutes outside without finding one of these birds. As the old saying goes, “familiarity breeds complacency”.

Over the past week I had the opportunity to lead a bird hike with a “group of folks” who’d never really been birding before. Can you guess what bird garnered the most attention and excitement? Yes, you guessed correctly, the Northern Cardinal, this month’s Bird of the Month.

I was able to point out birds like: Black-throated Green Warblers, Blue-headed Vireos, Rose-breasted Grosbeaks, and Indigo Buntings…just to name a few. But these birds were being upstaged by the much more common Northern Cardinal; at least in the eyes of the “group of folks” that had joined me for the hike on that day.

But you know what? I decided to take a step back and see this bird from the perspective of those who I was leading, and I…really…took a…long…look at this very common bird. (I probably hadn’t done that in over 10 years.) What I realized was that it is, in fact, rather easy to see why the cardinal was generating attention and excitement. Its bright red plumage, its conspicuous crest, its black face, its pretty song and its rather friendly character are indeed very attractive. I must own up to the fact that it’s actually a spectacular bird, and if this bird wasn’t so common, I’m sure we birders would make special birdwatching trips to see such a beautiful creature.

WHAT A GREAT BIRD!!!