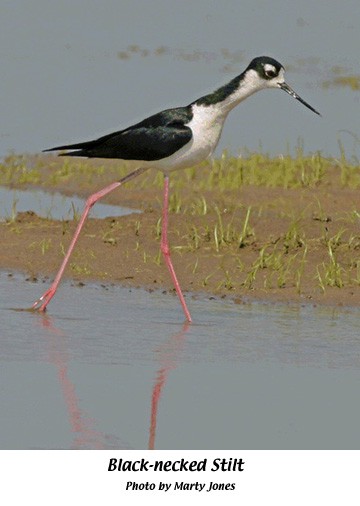 While standing on extremely long, thin, pink legs and sporting an elongated delicate-looking bill, this month’s bird appears to be the epitome of elegance and refinement.

This month’s Bird of the Month is the aptly-named Black-necked Stilt.

“Delicate”… “Elegant”… “Refined”…that is, while they’re undisturbed. But, when disturbed near their feeding or nesting ground, other words come to mind to describe the Black-necked Stilt. “Excitable”… “Noisy”… “Confrontational”…are more descriptive of this bird when it perceives a threat of some type. Intruders (including birdwatchers) are likely to be “dive-bombed” and scolded persistently while in the Black-necked Stilt’s territory. It feigns attack with its loud, sharp and grating…”yek-yek-yek-yek”…alarm while circling overhead!

There aren’t many Black-necked Stilts in Indiana, but from what I’ve read and observed, they seem to be making inroads in the Hoosier State. I’ve seen a few of them while visiting Goose Pond Fish and Wildlife Areadown near Linton, Indiana and I’ve noticed that, on IN-BIRD, Black-necked Stilts have been regularly reported at this great FWA. And even though considered rare here in Indiana, these distinctive birds are easily identifiable when seen, with their sharp and contrasting black and white color pattern.

While flying, the legs of the Black-necked Stilt trail “far” behind, because of the extreme length of their legs. As a matter-of-fact, stilts have the second-longest leg length in proportion to their body size than any other bird, exceeded only by flamingos.

WHAT A WONDERFUL BIRD!