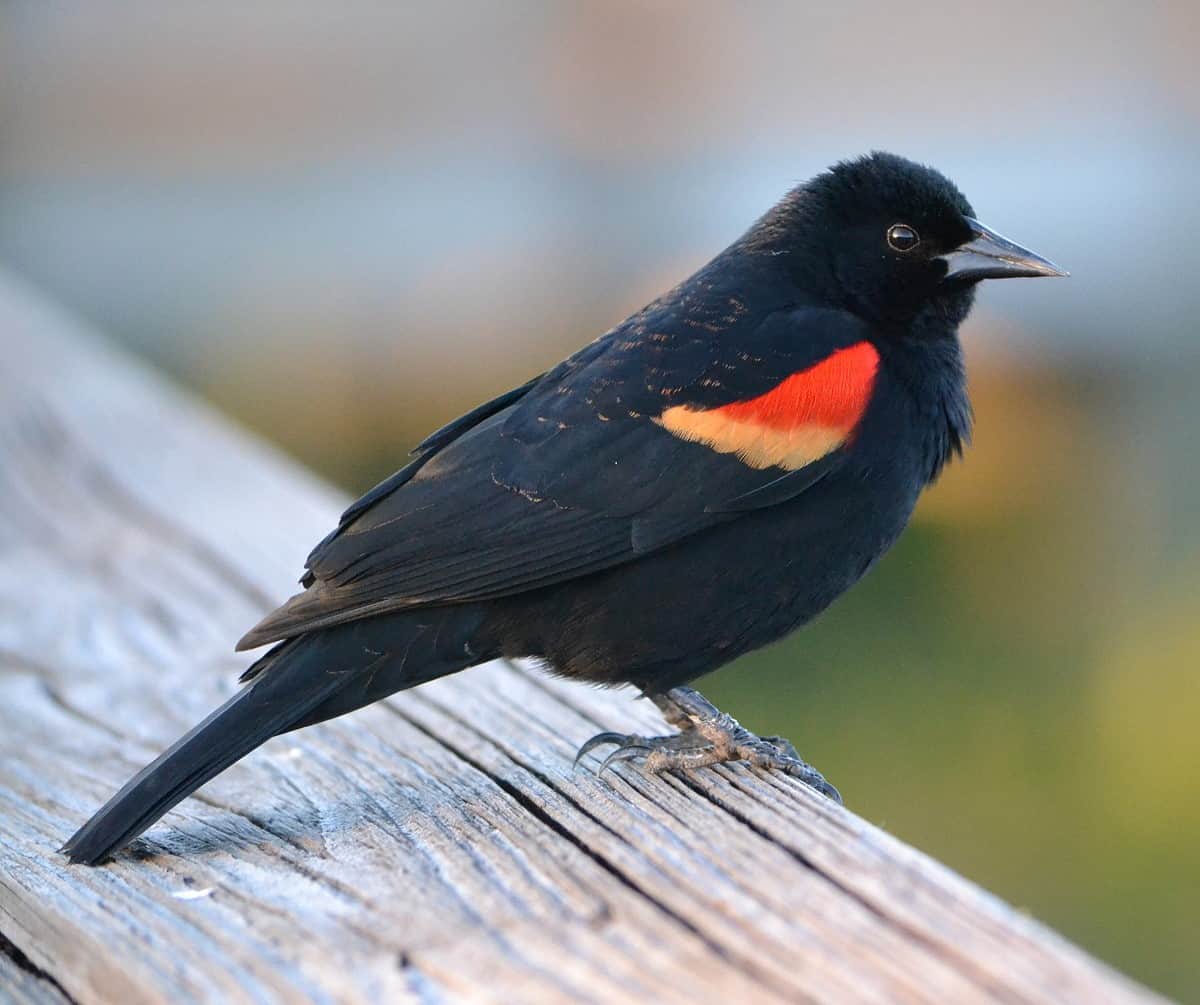 A familiar harbinger of spring, the Red-winged Blackbird is a welcome sight, with the males arriving in large flocks to establish territories before the females arrive. Arthur Bent wrote about their arrival in the Smithsonian Institution’s bulletin in 1958: “A flock of about fifteen redwings, adult males… arose from the same field and circled about, wheeling with better precision than the best of trained soldiers, their jet black uniforms and scarlet epaulets flashing in the sunlight as they turned. All their movements seemed to be governed by the same impulse, instantly obeyed, as they swooped down upon a small apple tree and alighted with every head pointing toward the wind. Our approach started them off again toward some swampy woods, where they scattered and alighted among the tops of the taller trees.”

Once seen almost exclusively in wetlands, this adaptable bird can now be spotted in fields and wooded areas near waterways. On my street, I have a pair nesting along the road in a brushy area inside a drainage ditch between a corn field and a soybean field. During the Breeding Bird Survey I conducted for the U.S. Geological Survey in June, Red-winged Blackbirds were one of my most plentiful species. I found them in pastures, yards and along the roadways. If you’re in search of a Red-winged Blackbird, they are not difficult to find!

The patches of red and yellow on the males’ wings really stand out, especially during mating season when they puff out their wings, display their patches and call out to claim their territory. The females are more difficult to identify and see. Their brown streaks enable them to be perfectly camouflaged among the cattails and grasses. Since the female is the primary caretaker of the nest, she cannot afford to be seen.

A male with prime territory may attract up to 15 females to his area. He spends a great deal of time defending his territory against other males and against real and perceived predators. There are several videos on YouTube of the males attacking Sandhill Cranes, Geese, Swans and other animals. My favorite is the video of a determined Red-winged Blackbird in an urban area attacking people on their way to work at Parliament Hill: https://www.youtube.com/watch?v=2MBNpCFLpaI

Numerous studies have been conducted on these birds. Scientists have painted their wings, checked their acoustics and banded over 700,000. For example, when the red and yellow wing patches were removed by scientists, the males lost their territories (“An experimental study of the territorial function of vocal and visual display in the male red-winged blackbird”, Peek, 1972). However, when the patches were reddened, the males also lost their territories more often (“Epaulet color and sexual selection in the Red-winged Blackbird: a field experiment”, Yasukawa, et al., 2009). When scientists studied the birds’ calls, they determined that danger calls were omnidirectional (sound waves were spread in a wide arc), while courtship calls were directional (aimed at a specific target) (“Differences in acoustic directionality among vocalizations of the male red-winged blackbird (Agelaius pheoniceus) are related to function in communication”, Patricelli, et al., 2006). Scientists have also learned that there is a benefit to the females if they share a male with multiple females: decreased nest predation (“Polygyny and sexual selection in Red-winged Blackbirds”, Searcy, 2014).

Cornell has posted an informative 3-minute video about the Red-winged Blackbird on YouTube. You can watch it here: https://www.youtube.com/watch?v=c0Lw23yQFwQ