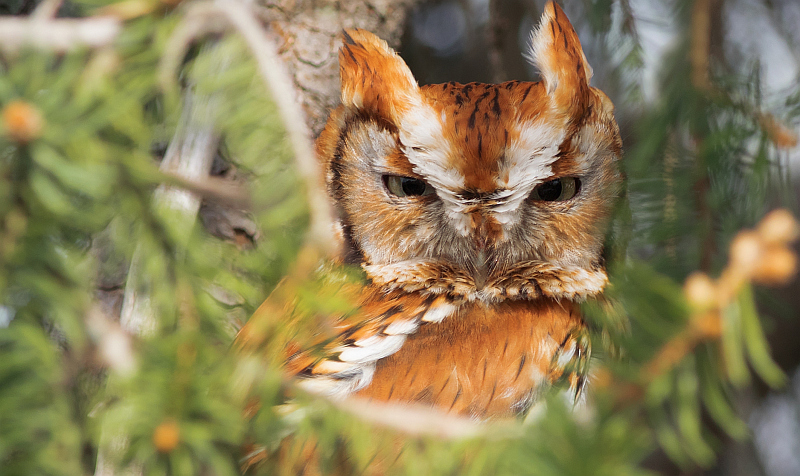 The first time I heard the whinny call of a Eastern Screech Owl I’m not going to lie, I was like “what the heck is that?” It’s a bit haunting to hear in the dark. I was so intrigued by the sound I had to figure out what it was I was hearing, taking into account this was a sound I was hearing I night, I thought OWL, now which one? I finally nailed it down to Eastern Screech Owl, “HOW EXCITING” I thought. A few days after my daughter was walking out to the mailbox to get the mail, she came running in, “mom, mom there is a tiny little red owl sitting on a branch really close in the pine tree” I grabbed my camera and slowly approached, low and behold there was the tiniest little red owl sitting there just looking at me. I slowly lifted my camera and took a few photos and left. (attach photo) Not long after that I was searching the same pine with my binoculars and came across a gray morph too, so now I’ve seen a gray and a red in the same tree.

At night I could hear the whinny calls of both owls, I was thinking to myself “I could possibly have a pair” I once again headed back to the computer to do some research on nesting- Eastern Screech-Owls nest in holes and cavities, but never dig a cavity themselves, they depend on tree holes opened or enlarged by woodpeckers, fungus, rot, or squirrels. They often occupy abandoned woodpecker nest holes. Eastern Screech-Owls readily accept nest boxes, including those built for Wood Ducks or Purple Martins, and sometimes nest in wood piles, mailboxes, or crates left on the ground(copied) how cool is that? There clutch size can be anywhere from 2-6 eggs, they raise one brood, incubation period is 27-34 days and nestling period 26-30 days, when owlets hatch they are covered with white down, eyes are closed.

While the female incubates the eggs and hatches the young, the male will perch close by, that’s why I was always seeing the red morph(male) perched in a pine tree, the nest cavity was close by, but I was never able to locate it. We have a very old silver maple tree adjacent to the pine with several cavities, she could have been in any one of them. While the nesting period was going on, the female stays in the nest hole except for brief dawn and dusk excursions. She and the nestlings are fed by her mate, though it is the female who tears the prey into small bits for the babies. Under the big pine, I would find all sorts of interesting things, crayfish parts, decapitated voles and mice, even a small fish and TONS of pellets ( the stomach cannot digest the fur, bones, teeth, feathers, and insect shells from that food. … These “extra” parts are formed into a tight PELLET inside the owl and are then are later SPIT UP by the owl)

In addition, the Eastern Screech Owls diet consists of many things; small animals, including birds and mammals as well as surprisingly large numbers of earthworms, insects, crayfish, tadpoles, frogs, and lizards. They eat many kinds of mammals, including rats, mice, squirrels, moles, and rabbits. Small birds taken as prey include flycatchers, swallows, thrushes, waxwings, and finches, as well as larger species such as jays, grouse, doves, shorebirds, and woodpeckers. This owl is agile enough to occasionally prey on bats.

After doing a little simple math I figured the owlets should be branching(that’s when the owlets leave the nesting cavity and begin to balance on branches,  this will take place approximately end of April into the beginning of May. I started scanning with my binoculars and found FOUR tiny owlets sitting on branches, 3 were gray one was red, they were so cute and fuzzy! (insert photo) At fledging, the young first hop to the ground or nearby branches, using feet and fluttering wings to climb laboriously back to safety. Young gain flight and hunting skills slowly; they depend on their parents for food for 8–10 weeks after fledging. Both parents feed the youngsters at this stage, and adults, especially the females, shelter together with the young in communal tree roosts. Gradually, as the young gain skill, they begin to roost and hunt apart from their parents and siblings.

They are such, beautiful, amazing-agile birds, I feel blessed to have seen them so up close and personal for some many years.