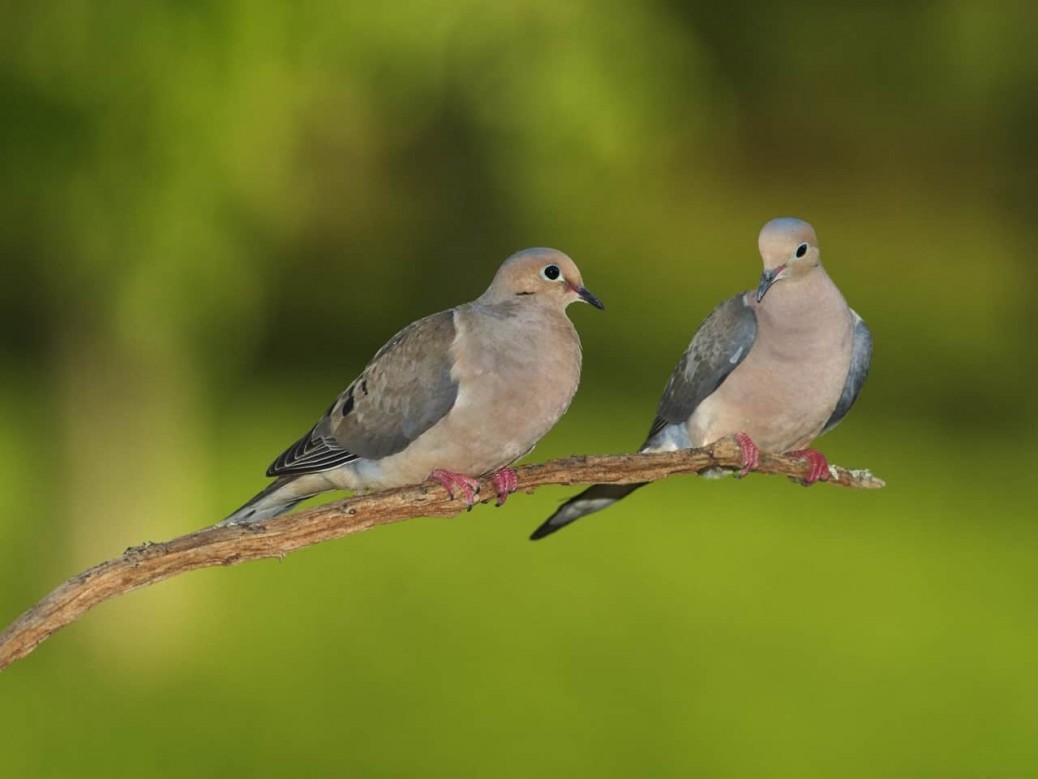 Imagine eating 10 – 20% of your body weight during a meal, washing it down with salt water, then waddling off to digest that feast. How long do you think you would survive? Mourning Doves can drink brackish water (half the salt as sea water) without any ill effect. Doves in the desert have few choices of water sources, so this adaptation allows them to survive when other animals, including humans, cannot. In addition, if they find a good food source, they eat as much as they can in one sitting. Once their crop is full with up to 17,200 seeds, they find a safe location to sit and digest their meal.Mourning Doves have several other interesting behaviors.

Doves produce milk for their young and feed only milk to their chicks for the first days (“Mourning Dove”, NCRS  2005). The milk contains more protein and fat than cow’s milk. During takeoff and landing, the dove’s wings make a whistling sound. This is caused by the design of the wings. The flight feathers at the back of the wing are shaped in a way that created an audible vibration when the wings flutter rapidly. A study in 2008 found that the wing whistle caused by a panicked bird served as an alarm for other birds, while the wing whistle caused by a normal takeoff had no effect on surrounding birds (“Mourning dove (Zenaida macroura) wing-whistles may contain threat-related information for con- and hetero-specifics”, Coleman 2008).

Since 2003 Indiana has been participating with the U.S. Fish and Wildlife Service in a Mourning Dove banding program. Each summer, over 1,000 Mourning Doves are banded in several locations across Indiana. During certain weeks from September to January, hunters are allowed to kill up to 15 Mourning Doves per day, with up to 45 per season. In 2014 over 14,000,000 were shot in the United States, with over 200,000 of the kills in Indiana. Hunters are asked to report any banded birds to the DNR and USFWS to help scientists determine harvest rates and geographical distribution of the birds. Wings are also collected from the hunters to determine the age of the birds. In the eastern U.S., the number of hatch year Mourning Doves harvested in 2014 was 42% higher than that of after hatch year birds (USFWS “Mourning Dove Population Status, 2014″).Scientists have discovered that lead poisoning from ingestion kills up to 5% of Mourning Doves per year (USGS). The birds need grit in order to digest their food properly, and the lead pellets look like gravel. The doves often forage in fields planted to attract the doves for hunting, so there is an abundance of lead shot on the ground for the Mourning Doves to ingest. The consumption of lead shot, fishing sinkers, and related fragments is a serious concern for many other bird species as well, including raptors, waterbirds, California Condors, and quail. Death from lead poisoning is lengthy and cruel as the toxins are slowly absorbed by the body tissues and organs, resulting in severe wasting of muscles, impacted esophagus, enlarged gallbladder with green bile, progressive weakness, and inability to fly. Some hunters mistakenly believe that lead shot is more effective than non-toxic shot, but that belief was proven false in a study by Texas A & M (“A Comparison of Lead and Steel Shot Loads for Harvesting Mourning Doves”, Pierce, et al. 2015) When hunting or fishing, be sure to use lead-free materials!